Chord Inversions: Build a Chord Vocabulary You Can Be Proud Of

Chord inversions might sound pretty scary, but if you have a good understanding of triads and you put in a little practice, eventually they become second nature.

Remember that triads are 3 note chords consisting of the first, third and fifth interval. Understanding what makes up a triad is fundamental to all chord theory.

For a quick refresher on triads, check out Chord Theory: An Introduction to Triads

I like the basic triads. I’m a fan. Here’s why:

When I studied triads and the CAGED system (more on the later), chords started popping out all over the neck. Suddenly, I could grab a G chord at the 9th fret.  Who knew?  Before this, I thought chords were resigned to the open position or power chords.  Period.

Getting the basic triads and their inversions under your fingers will help keep your playing interesting.  For example, say you are playing rhythm part along with another guitarist. Instead of doubling his chords, you can add a completely different texture to the mix by utilizing triads.

Take a listen to these two tracks. Both are a quick G, C, G, D progression. In track one, guitar two simply doubles the rhythm part of guitar one. Cool, but guitar two doesn’t really add much.

But in track two, guitar two plays a mix of triad voicings and chord inversions of the same G, C, G, D progression.

Now we’re getting somewhere. This is a cheesy example, sure, but hopefully you can see the potential of using triads and chord inversions in your playing.

Turn a Triad on its Head With Chord Inversions

Now that you’ve heard the contrast that chord inversions can bring to the table, let’s take a look at how we invert a chord.

Remember the chord formula for the major triad is 1-3-5, meaning that the chord is made up of the root, third and fifth interval in that order from lowest to highest pitch. So if we were to play a G Major Triad, we would need the notes:  G, B and D.

Usually, the root of a chord is in the bass – the lowest note in the chord.

What happens when you take the same three notes and arrange them differently from low to high? In other words, re-write the chord formula from low-to-high as 3-5-1 or 5-1-3. Since the G, B and D note combination is still a G Major chord, playing the notes in a different order still yields a G Major chord. But these mutations where the 3rd or the 5th is the first note certainly have a unique sound. These different versions of the G major chord are called voicings.

In particular the voicing with the 3rd in the bass is called the 1st inversion.

The voicing with the 5th in the bass is called the 2nd inversion.

Since there are only three notes there are really only three combinations of different notes that can be played:  1-3-5, 3-5-1 and 5-1-3.

For G Major, the first chord inversion is spelled B – D – G.  Now that we know the notes needed and the order of pitch that we need to play, we can find that sequence of notes on the fretboard.  This is one instance where knowing the note names on the fretboard really comes in handy.  You do know your fretboard, right? 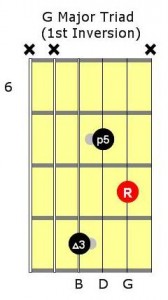 The second inversion of a major triad is written 5 – 1 – 3.  This second inversion moves the 5th to the bass note and the 3rd to the highest sounding pitch.  In keeping with our example of G Major, the chord is spelled D – G – B. Applying this to the fretboard, these exact notes can be found neatly arranged on the twelfth fret (see chord diagram). 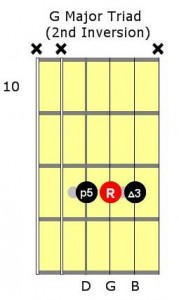 Use Chord Inversions to Build A Vast Chord Vocabulary

The major triad, its first and second inversions, are technically one chord. But, knowing these chord voicings and where to play them will add many new textures and colors to your arsenal. It doesn’t matter if you play blues, rock or jazz, you can get a ton of use from a good working knowledge of triads and their inversions.

See if you can use the example of G Major to derive all of the other major chord triads and the 1st and 2nd chord inversions. You can see very quickly that having three different ways to play a simple chord can really bolster your chord vocabulary.

So, work chord inversions into your practice schedule.  A simple exercise playing the triad followed by its 1st and 2nd inversion can help you get to know the chords.