In this lesson, we continue our study of a typical 12 bar fingerstyle acoustic blues progression in the key of E major.  We looked at the E major chord, the I chord, which appears in bars 1 – 4 and then again in bars 7 and 8.  Then we threw in the bluesy IV chord, the A7 chord, for bars 5 – 6 and again for bar 9.

We know these two chords appear in these specific bars using the 12 bar blues formula: 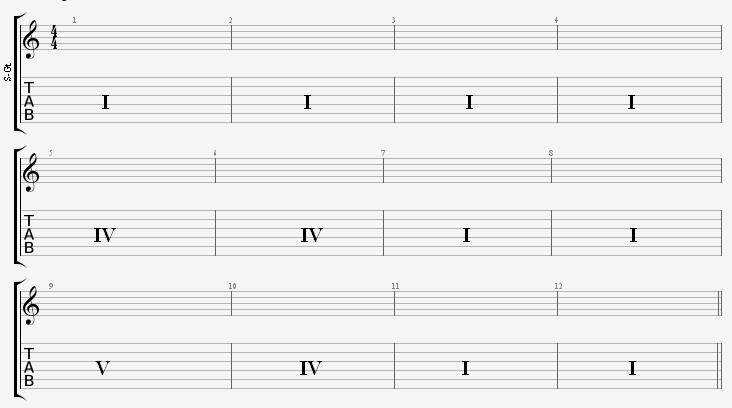 The Moment We’ve All Been Waiting For…

Musically, one of the strongest chord changes that you can make is from the I chord to the V chord.  There’s more theory buried in that last statement than my head can hold.  The I to V move is somewhat dramatic and it lets the listener know that something is about to happen.

In a 12 bar blues, that ‘something’ is the turnaround occurring in the last two bars of the progression.  We’re almost there!

Perfectly placed in bar 9, we hang out with the B7 chord for one measure.

In Lowcountry Blues, the chord is enhanced with a quick bass run to setup the B7 chord and also has a nice hammer-on thrown in to spice things up a bit.  If you haven’t seen the whole tune, check it out here.

Also, check out this video to really dive into this part of the song.

Looking at the 12 bar blues formula above, it appears that the all important V chord (in the key of E, B or B7) is only present for one measure.  Well, there are several common variations of the basic 12 bar blues progression.  The most common of which is to end the progression with the V chord instead of the I chord as shown above.

So while we may return to the B7 chord for bar 12, I like to view bars 11 and 12 as super-special turn around territory.  A given turnaround may or may not contain the V chord.  That’s part of the magic of those two bars.  Gotta keep ’em guessin’ right?

My favorite part of the 12 bar progression, the turnaround waits just up ahead.

Until then, keep pickin!