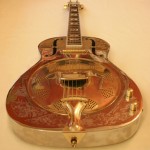 A while back, I was listening to Taj Mahal’s best of album and a couple of items struck me.

Taj, recorded this long before the Crash Test Dummies made the non-word chorus cool…., well at least popular.  Taj did it first!  He has an entire track on the album of nothing but the sound Mmmm Mmmm hummed to a melody.

I remember hearing this for the first time.  Honestly, at first, I thought:  are you kidding me?

This guy is an amazing bluesman and he puts this garbage out?  This track was very frequently skipped when it came up on my iPod.

Then, for some reason the other day, I actually listened to the entire track.  By the end of it, I was smiling.  I mean, it’s silly for sure.  But why does blues have to be serious all of the time?  Why can’t we be playful?  That track is the epitome of playfulness.

Somewhere in the track, Mr. Mahal talks about how that was a game that he and his mates made up as kids.  You gotta respect that!  Hanging around the house, and making use of music to play a game.

You can almost hear one of the young boys say, “Hey, which one of you can sing the best song without any words?”

This track probably won’t be in heavy rotation in my collection, but it was kind of refreshing.  Maybe I’ll put it one when I need a little laugh.