What is the Pentatonic Scale?

If you’ve been playing guitar for a minute or two, you’ve no doubt asked yourself, “What is the pentatonic scale?” You don’t have to search the ‘net long or flip many pages of your favorite guitar magazine to find tons of pentatonic praise. Pentatonic scales are insanely popular in rock and blues but exist in different cultures music all over the world.

What is the Pentatonic Scale?

Simply put, a pentatonic scale is a 5 note scale.  From the extremely common major and minor pentatonic scale to the more exotic Hirajoshi scale, these scales cover a lot of musical ground with just 5 notes.

The true answer to the question “What is the Pentatonic Scale?” is, there is no single pentatonic scale. The term pentatonic scale refers to any scale that contains only five notes.

Take a look at the scale formula for the major pentatonic scale:

You can see the missing tones are the 4th and 7th scale degrees. The notes from low to high of the A Major Pentatonic Scale are: 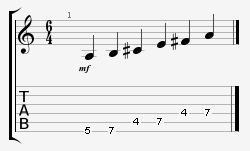 Put on any of B.B. King’s records to get a sense of the importance of the major pentatonic scale. This scale in all keys and positions should be a serious area of study for any aspiring bluesman.

The best way to really internalize this scale is to practice it incessantly. Run through exercises like the ones described here in all keys.

I know practicing scales is not the most fun thing to do on guitar, but when you run through a scale, you are training your ear, brain and fingers simultaneously.

Knowing your scales inside and out is the best way to make sense of what you hear on your favorite records.

Make this a part of your daily practice routine and you’ll be pulling off some tasty B.B. King style licks in no time.