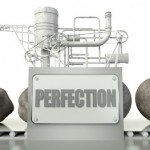 Is it better to play perfectly or with heart?

As guitarists, we’re taught to play with a metronome, perfectly in time, hit all the notes cleanly and be technically proficient.

While you do need to master the basics and possess some technical prowess, I find it intriguing that many of the blues legends were a little bit….well, imperfect.

But even Lightning Hopkins, a true legend, was known for his tendency to ignore the tempo and just play what he felt.  When caught missing a chord change, this renegade bluesman said, “Lightnin’ change when Lightnin want to change.”

How many times did Hendrix grab a wrong note only to bend it up into stratospheric perfection?  There are several instances when Robert Johnson added a beat to a measure or rushed a chord change. Why?

If It Feels Good Do It

When you play acoustic solo blues, you have a ton of freedom.  There’s no drummer hounding you to stay in time or scowling bass player wondering why you aren’t changing chords when you’re supposed to.  It’s just you and a guitar.  Free at last!

This opens you up to play to the tempo in your head, however perfect or imperfect that may be.  Because of this, you can play to your own set of rules which may not be considered technically “perfect”.

One acoustic fingerpicking technique that I think falls into this “less than technically perfect” category is something that I like to call the “Brush Up” technique.

Use the Brush Up Technique to Add Fullness to Your Blues

Sometimes when your playing a fingerstyle blues tune, playing cleanly and technical can leave the performance a little flat. You can overcome this by, guess what?

Being a little sloppy.

This is great news for me!

To use the brush up technique, use your index finger on your picking hand to pull up through a few strings while playing the melody on the 1st string. There’s almost a little strum to it.

Check out this video of Clapton laying down a great rendition of Robert Johnson’s ‘Love in Vain’ to see the technique in action.  I think you’ll see that with some practice, you’ll be able to work this technique into your own playing.

How To Play the Brush Up Technique

Here’s a video lesson showing you how I integrate this technique into my playing.  It’s not an overwhelmingly different sound than good ol’ clean playin’, but really the subtlety is the key here.

Note that you can also do the opposite and brush down with your thumb. Push through the bass strings and hit the one that you’re not supposed to a little.  You’ll find that it adds a little more chunk or thud to the performance.

I want to be clear, I’m not advocating sloppy playing.  I fight my own sloppy playing every day and its a constant challenge to overcome.  But, I do think that we can learn a bit from those mojo-filled moments where Lightnin’ hung onto a chord because it felt right or when Mr. Johnson added an extra beat to an intro.  Clearly these guys made the music that inspired millions of guitar players.  Who am I to say that they should have practiced with a metronome a little more?

I believe the trick is that you need to have the ability to play perfectly, but then have the guts to shed the perfection in favor of heart/feeling when the moment comes.

I’d love to hear from you. What do you think?

Is there too much emphasis put on playing perfectly?