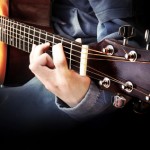 Now that you have the first three chords G, C and D down cold, it’s time to move on to the second batch of beginner guitar chords.

The next two beginner guitar chords you should learn are the A major and E major chords.  We will learn these two chords in the open position just like we did with the G, C and D chords mainly because they are big full chords and have a great sound and also because they are used in a ton of great tunes as well.  They also set the stage for learning barre chords which will help set the stage for playing chords all over the neck.

Here are the chord diagrams for both chords:

Practice these in the same manner you practiced the G, C and D chords that is – playing the chord and then picking each note to make sure each string rings perfectly clear. (Figure 1 and Figure 1a)

Congratulations, when you can comfortably play a simple progression like this the of G, C, D group and separately in the A, E, D group, you can successfully play hundreds of songs!  Three chord rock, anyone?

Play Along with Simple (Yet Cool) Songs

Check out these songs that come from the A, D and E chord group:

Here are a couple to check out from the G, C and D chord group: